I loved the atmosphere of Terra State!" ~ Corbin Rickard

Corbin Rickard always had a love of music while attending Danbury High School in Lakeside-Marblehead. He played in a band called Unlabeled and wanted to pursue a music career. After graduating in 2013, Corbin headed to Terra State Community College to begin his studies. His younger brother of two years Shay had an interest in music, but not on the same level as his older brother. Shay began playing bass in Unlabeled after graduating high school in 2015. He developed a bigger interest in music after hearing what Corbin had created on his computer for his Terra State classes. “Corbin bought a computer and we started making beats at home,” Shay recalls. “It caught my attention. This was a side to music that I had never seen before. It sparked my interest to go to Terra State.”

Corbin was originally drawn to Terra State through a work-study program. “My last year of high school, I was on a work program so I only had three classes,” he says. “The school thought about sending me to Terra State for my senior year. I actually wanted to stay at Danbury and work, but I was sent to Terra State so many times it became the place I wanted to go. The Recording Technology teachers talked to me and drew me in by telling me what I could do with a degree.” At first, Corbin wanted to take classes to support Unlabeled, but over time he became drawn to the recording side of the business.

Shay, on the other hand, wanted to follow in the steps of his brother, but on the business side. The two talked about what it would be like to open their own recording studio. “One of us needed to have a business background, while the other needs to know how to operate everything,” he says. The two brothers ended up earning the degrees at the same time in 2017. Corbin in Music Recording and Technology and Shay in Music Business.

Their experience taking classes at Terra State was outstanding for the two brothers. “I loved the atmosphere of Terra State,” says Corbin. “We were required to do internships at the Sandusky State Theater and were kind of just thrown into it. All of the sudden, I was working in the industry. That to me was awesome. It was great that we got to start hands on.” Corbin also liked playing guitar for an ensemble and working events for the Ohio Arts Presenters Network.

Shay concurs on the Terra State atmosphere. “When I arrived on campus, it was a lot of meeting people,” he says. “In my first class, we were taught about how important it is to make connections in the music industry. I spent a lot of time talking with fellow students.” Shay was also exposed to the Sandusky State Theater that has turned into a full time job. 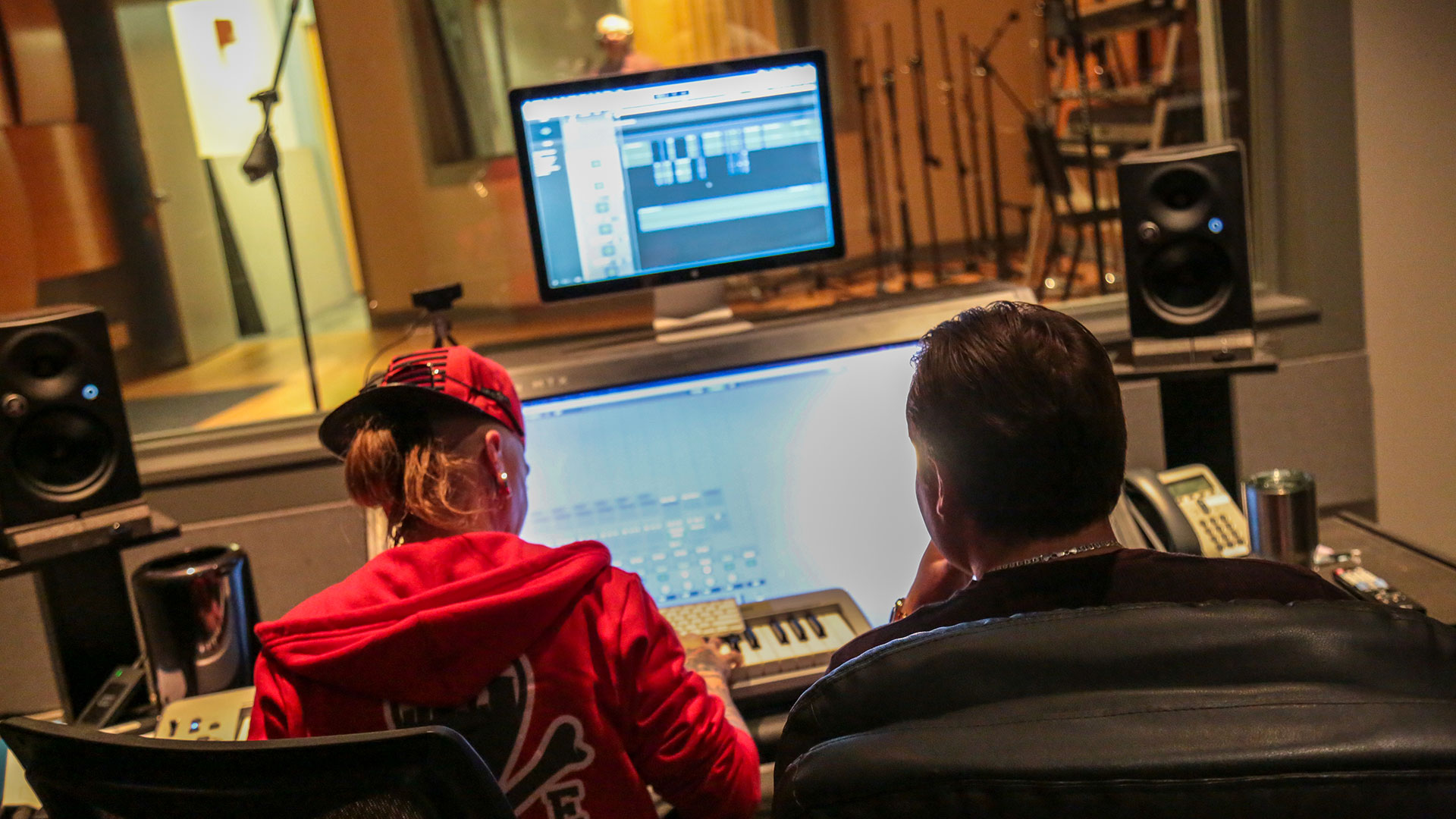 Terra State helped us discover exactly where we were going to go in the music industry. 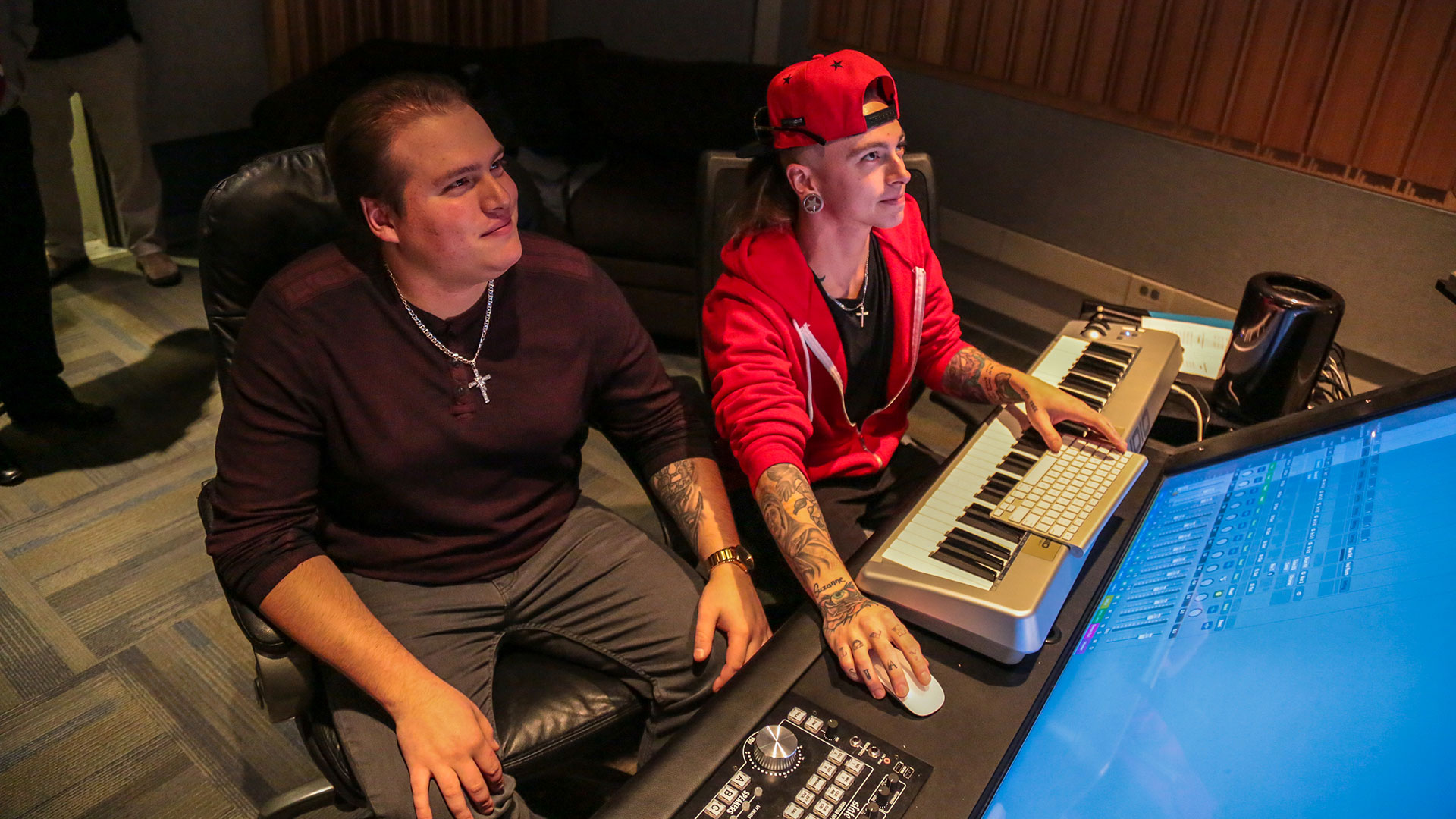 Corbin and Shay loved music in high school and knew they needed to learn more about the industry so their love could become more than a side gig, so they decided to come to Terra State. 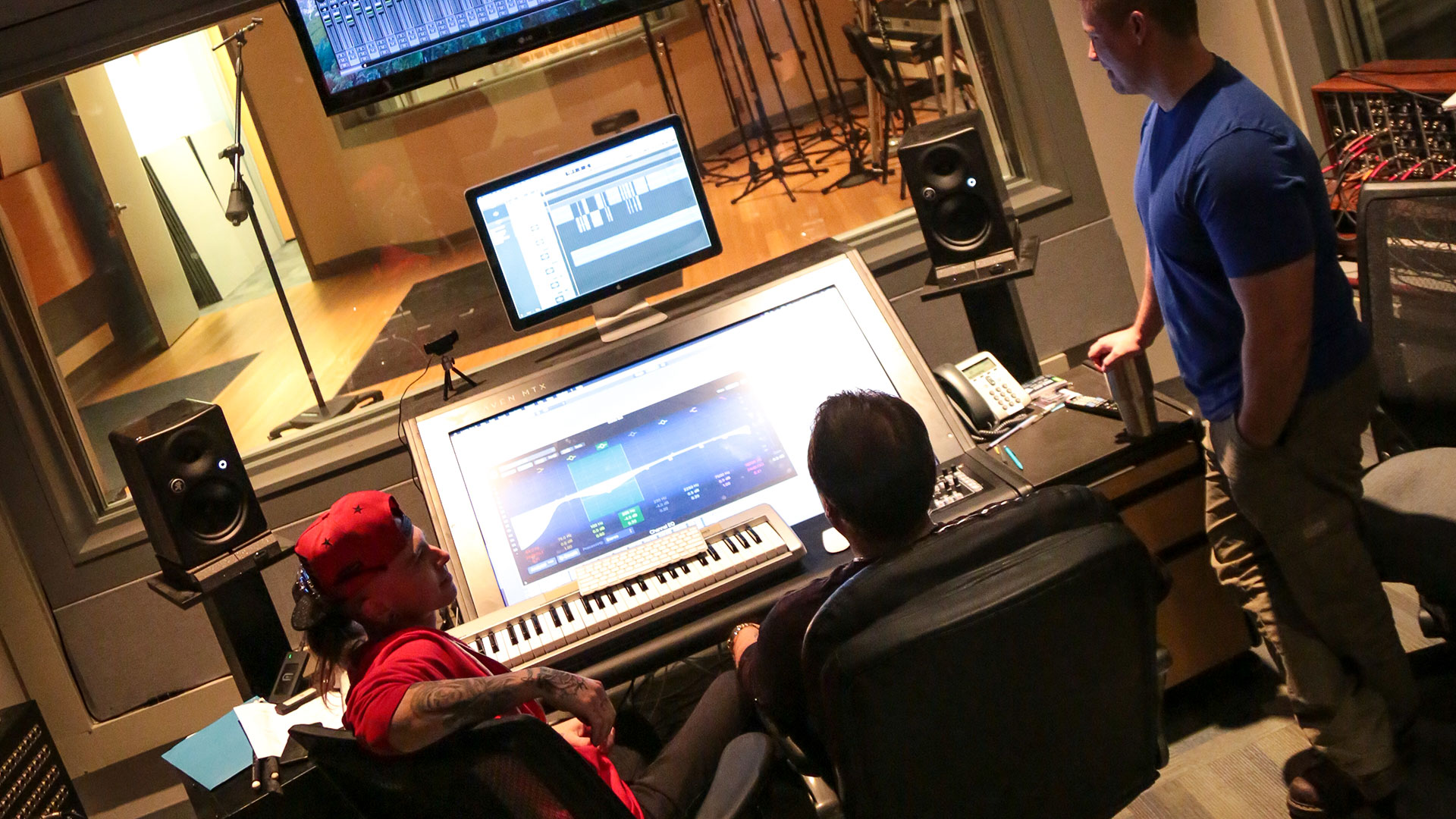 They started recording music in their bedroom and discovered their passion for music and business. Terra State helped them learn more about both! 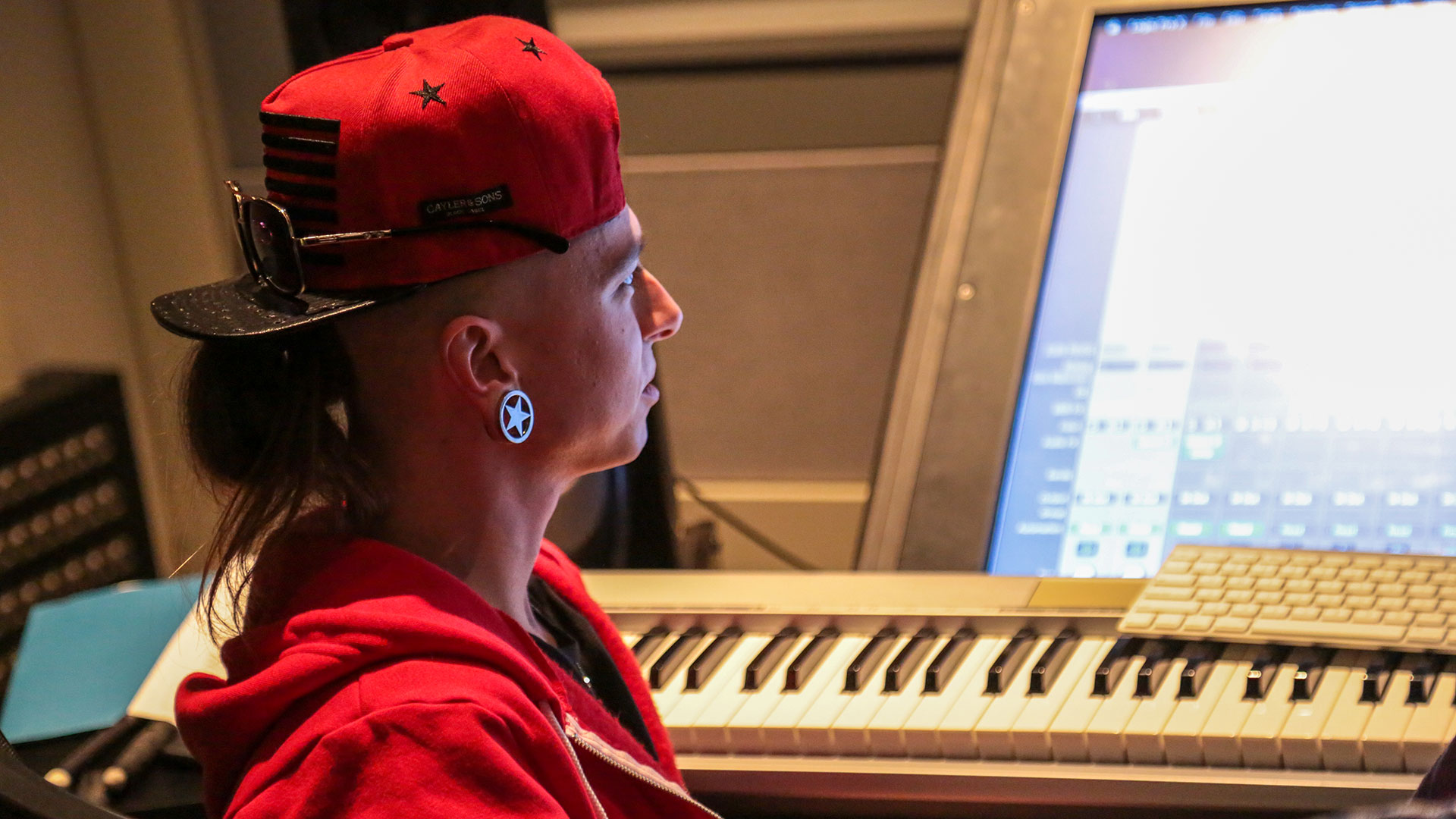 They both agree that the atmosphere is very laid back and enjoyable. 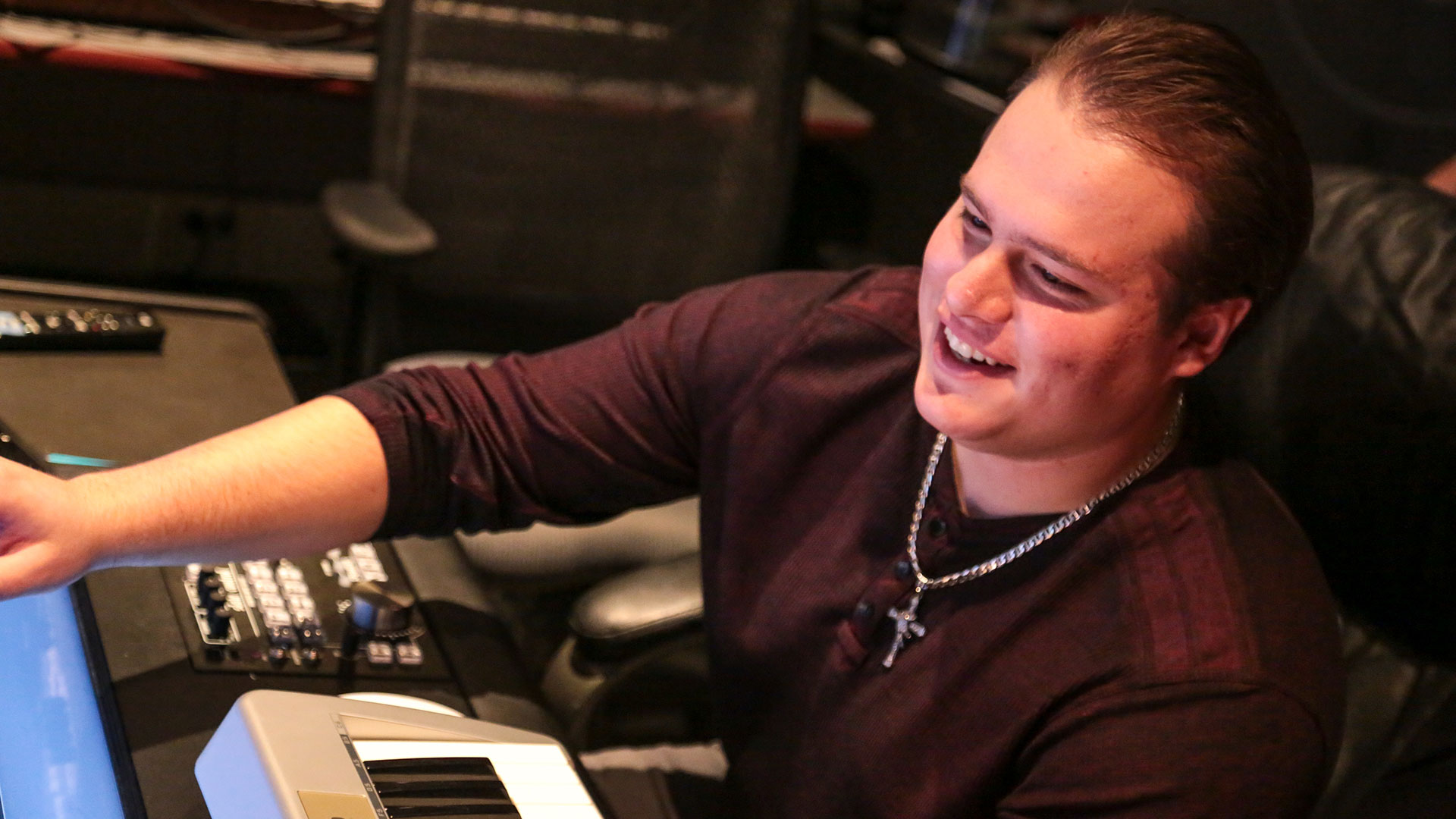 Coming to Terra State allowed us to gain lots of networking connections and they use those connections to further their business.

The brothers have obtained their goal of starting their own business. The two have opened Ancient Eagle Studios in Marblehead. “We started off with a little computer and one microphone about three years ago,” says Corbin. “We are growing in assets and have upgraded all of our equipment. However, we have more equipment than space, so we are looking for a new larger location.” Most of the time, the two are writing songs. “We will write out chord melodies and make beats,” Corbin says. “Then, if an artist wants to record with us, they will come in and write lyrics to the song we wrote, record and we will master it. We will then be able to give the artist a fully produced song.” Shay adds, “We do all of the writing for our hip-hop genre. We have worked with some local artists who are very patient and that has allowed us to learn how to produce songs and work with people.”

For those looking to get into the music business, Corbin provides this advice, “Stick to it. This industry is really up and down and at times it may seem like you are struggling, but at that point you are learning the most. As long as you keep pushing yourself, you are going to find your spot.” As for getting your start at Terra State, Shay says, “For the price, Terra State is perfect. You get a lot for what you pay for. Even if you are going to go on to a four-year college, Terra State is a great start.”

To learn more about Ancient Eagle Studios offerings and to hear music created by the Rickards, visit ancienteaglestudios@gmail.com.